. Then one can verify that for

, and it was shown by Giroux and independently Kanda that these contact structures are not contactomorphic for different values of

are contactomorphic to one of these. The claim is that if

is not strongly symplectically fillable, but all

First we will show that

as the boundary of

parametrize the boundary of

. We can put a symplectic structure on

by taking the product of area forms on

. We want to show that this is a weak symplectic filling of

. This is not immediately obvious, so instead we look at a family of contact structures,

is a weak symplectic filling of

. It is clear that the submanifolds

are symplectic submanifolds of

. Clearly these planes do not form a contact structure on

since they are integrable, but

will evaluate positively on a nearby contact structure. With this in mind, set

so we have a homotopy through contact structures from

. By Gray’s theorem there are diffeomorphisms

is close to zero,

is an open condition, there exists some

is a weak symplectic filling of

. This shows that all

Eliashberg shows that for

. Take the product of circles

. This is a Lagrangian 2-torus inside

. Any Lagrangian submanifold, has a neighborhood symplectomorphic to a neighborhood of the zero section of its cotangent bundle. One can explicitly show that a disk bundle inside

, using the radially outward pointing Liouville vector field. Therefore the complement of a neighborhood of this Lagrangian torus in

. We can take an n-fold cover of the complement of this neighborhood in

so that on the

is covered n times. This cover has a symplectic form given by the pull-back for which the

. This n-fold cover has

ends, each symplectomorphic to the complement of a large compact set in

. If it were possible to cap off the concave boundary component with a convex symplectic filling of

, we would obtain a symplectic manifold without boundary, but with n standard ends. A theorem of Gromov states that this is impossible (if someone has a good explanation of the idea of this proof, that might make a good new post that I would appreciate). Thus we have reached a contradiction to the assumption that

is strongly symplectically fillable for

While this example establishes the inequivalence of weak and strong symplectic fillability, the proof by contradiction and the reliance on a difficult theorem of Gromov which requires holomorphic curve techniques makes it difficult to see what the difference between weak and strong fillability would be in general. A generalization of this example was established by Ding and Geiges. They proved that a more general class of 2-torus bundles over the circle have contact structures which are weakly but not strongly symplectically fillable. Their proof that there are no strong fillings reduces the more general case to the original examples on

using contact surgery. While this doesn’t make the underlying cause of non-fillability more clear, it does illuminate the fact that certain surgery operations on contact manifolds preserve different types of fillability and non-fillability.

While we still do not seem to have a full understanding of when strong and weak fillability coincide and when they differ, there are certain situations where weak fillability implies strong fillability. Eliashberg proved the following proposition:

Proposition 4.1 in A few remarks about symplectic filling: Suppose that a symplectic manifold

. Then if the form

then it can be modified into a symplectic form

is a strong symplectic filling of

The idea is essentially to consider the primitive

, and to interpolate between the primitives

near the boundary and

on the interior of the weak filling. The condition that

be a weak filling ensures one can do this interpolation while maintaining the symplectic (non-degeneracy) condition.

While Eliashberg’s examples distinguishing weak and strong fillings were published in 1996, it took much longer to find examples of contact 3-manifolds which were strongly fillable but not Stein fillable. The technology needed to obstruct Stein fillability was the Heegaard Floer contact invariant. Ghiggini found the first examples in this paper, which were the Brieskorn homology spheres (with reversed orientation)

). These manifolds can be understood as 0-surgery on the positive trefoil knot in

-surgery on its meridian (or alternatively as Seifert fibered spaces over

with three singular fibers with coefficients 2,-3,

The 3-manifold obtained from

by 0-surgery on the positive trefoil is actually a

, because the trefoil is a fibered knot of genus 1. Its monodromy is well understood, and in fact this is one of the 3-manifolds considered by Ding and Geiges, which have contact structures

similar to those on

is a weak filling of

surgery on a meridian of this trefoil to obtain the Brieskorn spheres of interest. Ghiggini shows that this meridian can be realized as a Legendrian knot whose its contact framing twists

times around it, therefore performing

Furthermore, because the result of the Legendrian surgery gives an integer homology sphere, a weak symplectic filling can be perturbed into a strong symplectic filling, as mentioned above (since the restriction of the symplectic structure to the boundary is an exact form). Therefore we have strongly symplectically fillable contact structures on these Brieskorn spheres.

are not Stein fillable. Ghiggini proves this by showing that the contact invariant is in the fixed point set of an involution on Heegaard Floer homology, and then studying generators of this fixed point set. Properties of these generators imply that all of them are sent to zero by a map induced by a Stein cobordism between

, which is a linear combination of these generators is sent to zero by the map induced by a Stein cobordism, which is a contradiction. (One of the first theorems proved about the Heegaard Floer contact invariant is that it is sent to the generator of

by any map induced by a Stein cobordism from

More specifically, the generators of the fixed point set can be written as

is the contact structure obtained by Legendrian surgery on

as in the picture below, where the Legendrian unknot has

cusps on one side and

cusps on the other side. 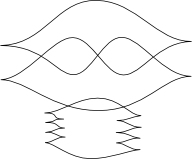 Note that each of these contact structures is Stein fillable (since it is obtained from Legendrian surgery), so their contact invariants are non-vanishing. By showing that

is even, the fixed point set of the involution on Heegaard Floer homology is generated by

. Furthermore, any map induced by a 4-manifold cobordism to

to the same element, so in

coefficients, the image of each generator of the fixed point set is zero.

In conclusion, these examples distinguish these three notions of fillability, but I think there is still a lot left to understand about when such examples can arise. Given an arbitrary 3-manifold, there is not usually much one can say about whether it supports contact structures that are strongly symplectically fillable but not Stein fillable, and unless it is a homology sphere it is hard to tell whether there could be weakly but not strongly symplectically fillable contact strucutres. The Heegaard Floer contact invariant has been a useful probe to obstruct Stein (and with twisted coefficients, symplectic) fillability, so a related question is to understand geometric conditions under which the contact invariant vanishes for tight contact structures (see Honda, Kazez, and Matic’s work for some situations when this occurs). Because there was a significant period of time where it was unknown whether weak, strong, and Stein fillability were equivalent notions, it seems that examples where these notions diverge are rare, but I don’t think we really have any idea how prevalent these examples can be, or what geometric properties can allow this phenomenon to occur.