The Chekanov-Eliashberg DGA is an invariant of Legendrian knots consisting of a dg-algebra whose differential is determined by counting rigid, punctured holomorphic disks in the plane with exactly one positive puncture and with boundary on the Lagrangian projection of a knot L.  Due to the Riemann mapping theorem, these counts of holomorphic disks can be determined diagrammatically and the entire dg-algebra structure can be obtained combinatorially.  This invariant fits into the broad framework of Symplectic Field Theory which gives invariants of objects across the contact and symplectic topology spectrum, such as symplectic homology and contact homology for closed manifolds, chain maps corresponding to symplectic cobordisms, and relative versions for Legendrians (resp. Lagrangians) in contact (resp. symplectic) manifolds.  In all cases, the invariants conjecturally are determined by counting punctured holomorphic disks of all genera and with arbitrarily many positive punctures.

However, the relevant analytic theorems are hard and the theories are not always defined in all cases.  Legendrian Contact Homology (or relative contact homology) is a generalization of DGA to Legendrians in all contact manifolds of any dimension and has been rigorously defined by Etnyre, Ekholm and Sullivan when the ambient contact manifold is of the form

an exact symplectic manifold, such as 1-jet spaces and affine space.  Here, the differential only counts holomorphic disks with a single positive puncture.

I’m interested in understanding moduli spaces of curves with multiple positive punctures and as an introduction, I read Lenny Ng’s paper (Rational SFT for Legendrian Knots) where he works out a Legendrian knot invariant that includes information about holomorphic disks with arbitrarily many positive punctures.  “Rational” here refers to the fact that he is only considering holomorphic disks and not punctured curves of higher genus.

In this case, one has to account for two phenomena that cause lots of problems, bubbling and multiple covers, which can ruin the equation

if they are not accounted for properly.  Ng follows an approach of Cieliebak, Latschev and Mohnke by using ideas from String Topology to account for these problems.  I’ll explain how he does this in a future post but before I get to that, I want to review basics about why counting holomorphic curves should even give a differential.

Take as an example the right-handed trefoil

by applying the Leibnitz rule.  For instance

Before canceling terms, think of what each monomial in

and a holomorphic disk with one positive puncture at $q_4$.  You should think of the monomial

as representing the disk obtained by gluing these two disks together: 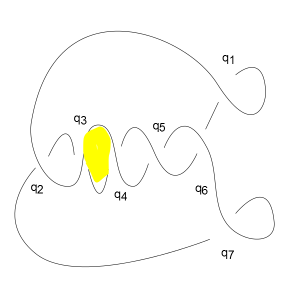 This is still a punctured holomorphic disk with one positive puncture, but it is not rigid and has an obtuse corner at

.  When computing the differential, I look for holomorphic curves with acute corners but in general I can find holomorphic curves with obtuse corners and the dimension of the moduli space in which it lives is the number of obtuse corners.  The reason is because at an obtuse corner, I can degenerate in two directions.  A local model of the puncture is that, traversing the boundary of the disk counter-clockwise, I get to the crossing, jump down a strand and immediately continue off to my right. 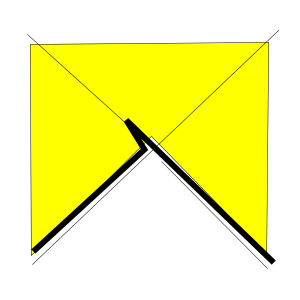 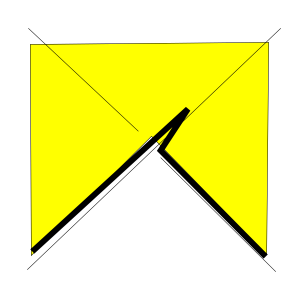 Again these are still punctured holomorphic curves with boundary on L.  If you need a local picture to convince yourself that it’s OK to turn around, think of what happens at the origin to the imaginary axis under the holomorphic map

I can degenerate along each of these arcs in my knot projection until it intersects the boundary of my disk.  My moduli space is not compact, but it limits to a broken curve where my holomorphic curve breaks into two pieces, each of which is a holomorphic curve.  This happens in both directions and the standard picture is the heart. 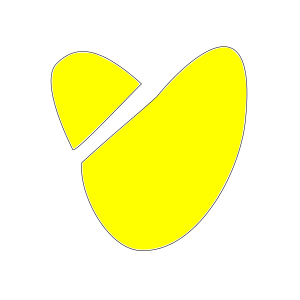 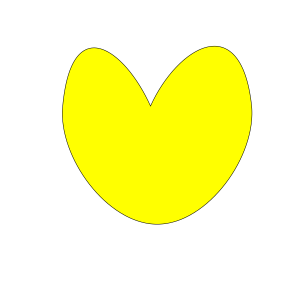 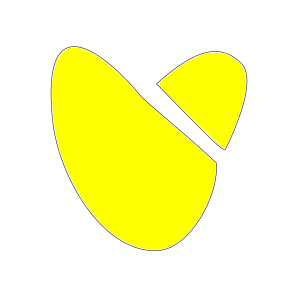 Broken curves are, in some sense, the opposite of gluing.  As you can see from the differential, I get two copies of the monomial

, one of which corresponds to gluing at

and the other from gluing at

.  Since we are working over

, these terms cancel; if we kept track of signs they would still cancel.  So, whenever I apply the differential twice, I get monomials which each corrspond to an end of a 1-dimensional moduli space and so these monomials cancel in pairs.

In general, you can show that

this proves that the map is in fact a differential.

Now, if I perturb a little, there is in fact a flow line that starts and ends at the same critical points but jumps the middle critical point.  It lives in a 1-dimensional moduli space of flow lines and at the other end is another pair of rigid flow lines.  The endpoints are called broken trajectories because it breaks into two pieces at its limit.